Actor Partner Interdependence Model in R: The Mental and Physical Health of Spouses

In this two-day, virtual data expedition project, students were introduced to the APIM in the context of stress proliferation, linked lives, the spousal relationship, and mental and physical health outcomes.

Stress proliferation is a concept within the stress process paradigm that explains how one person’s stressors can influence others (Thoits 2010). Combining this with the life course principle of linked lives explains that because people are embedded in social networks, stress not only can impact the individual but can also proliferate to people close to them (Elder Jr, Shanahan and Jennings 2015). For example, one spouse’s chronic health condition may lead to stress-provoking strain in the marital relationship, eventually spilling over to affect the other spouse’s mental health. Additionally, because partners share an environment, experiences, and resources (e.g., money and information), as well as exert social control over each other, they can monitor and influence each other’s health and health behaviors. This often leads to health concordance within couples; in other words, because individuals within the couple influence each other’s health and well-being, their health tends to become more similar or more alike (Kiecolt-Glaser and Wilson 2017, Polenick, Renn and Birditt 2018). Thus, a spouse’s current health condition may influence their partner’s future health and spouses may contemporaneously exhibit similar health conditions or behaviors.

This data expedition used the Health and Retirement Study (HRS) (2006-2012). The HRS is a publicly available, nationally representative dataset of adults over the age of 50 and their spouses that monitors changes in cognitive, physical, and functional health that are associated with aging. The core survey, which is fielded every two years to all participants (main respondents and spouses), includes information on demographic characteristics, physical health, mental health, and martial characteristics. In addition to the core HRS survey data, we also included publicly available supplemental data from the HRS Leave Behind Participant Lifestyle Questionnaire. In 2006, the HRS randomly selected 50% sample of survey respondents who completed the 2006 core survey to complete the Leave Behind Participant Lifestyle Questionnaire. In 2008, the other half of the respondents were eligible to complete the Leave Behind Questionnaire. This questionnaire included information on psychosocial variables such as social support, marital quality, and major life stressors. The 2006 cohort was remeasured again in 2010, and the 2008 cohort was remeasured again in 2012. Following previous research, we treated the 2006/2008 responses as Time 1 and the 2010/2012 measures as Time 2. Couples were matched on household identification number, which allowed us to identify individuals within the same marriage at Time 1 and Time 2.

Note: Data included in this report is a dummy-data set. HRS data cannot be shared with third-parties but is publicly available for download if third-parties complete a User Registration form.

Prior to the first class, students were instructed to read an Annual Review of Clinical Psychology article by Kiecolt-Glaser and Wilson (2017) and watch two webinars that introduced the concepts of linked lives and stress proliferation as well as provided an overview of the HRS dataset.

In the first class, we reviewed the substantive material related to linked lives, spousal health concordance, and the link between physical and mental health. We also discussed how there might be gender differences in how spouses influence one another. Students were then sorted into breakout rooms to discuss and respond to a range of questions that would prepare students for developing research questions related to the APIM.

We then spent time introducing students to the Health and Retirement Study, in general, and the variables included in our data expedition dataset, specifically. Students individually created and submitted hypothetical APIM with the HRS variables from the curated data set, so they could develop research questions to test in the following class. See the figure below for an example of the hypothetical APIM that students might have submitted.

Prior to the second class, students watched a webinar that introduced R cloud, and how to do basic data analyses in R such as finding the average of a variable or looking at a cross-tabulation of two variables.

In the second class, students returned to their previous breakout rooms and were asked to use the HRS data and code available to them in R cloud to run an APIM. The code in R created output in the form of a regression table and a color-coded APIM plot that signaled both statistical significance and the direction of the relationships (see below for examples). Students used the table and the produced plot to answer the guiding questions about husband’s and wife’s health at Time 1 and Time 2. Students wrote responses to the Guiding Questions with their groups and submitted their responses to Sakai by the end of class. 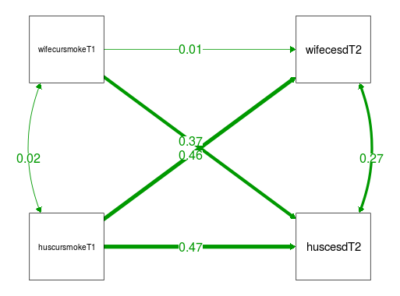 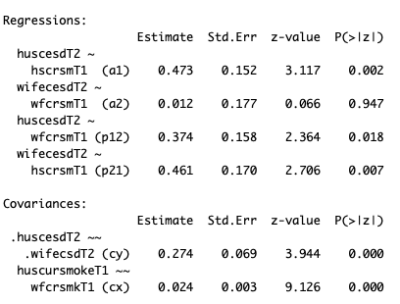