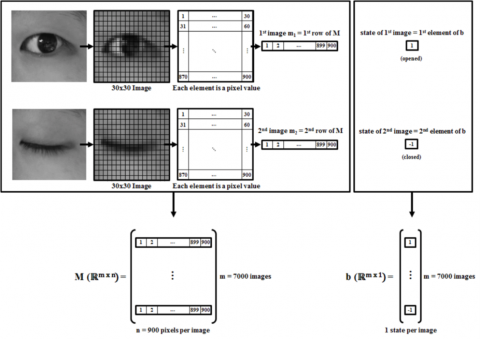 Dr. Guillermo Sapiro, professor in Pratt School of Engineering at Duke University, conducts ongoing autism research. Using image processing, he attempts to program a computer to detect whether babies (around eight to 14 months of age) display a sign of autism. This very early detection enables doctors to train these babies (when their brain plasticity is high) to behave in ways to counter the behavioral limitations autism imposes, thus allowing these babies to act more normally as they grow up.

One of the behavioral cues Dr. Sapiro looks for is the blinking of the babies’ eyes. This portion of the lecture notes focuses on the creation of an image processing algorithm for the detection of the blinking, in particular for the determination of whether an eye is open or closed, by applying concepts of linear algebra.

The input to the algorithm is a picture of an eye. Each input image consists of 30(width) x30(height)= 900 pixels. Each pixel carries a numerical value in the range of 0 to 255, which represents the combination light intensity detected by the red, blue, and green light receptor channels of a camera. The significance of each pixel varies. The image of an open eye will have two major dark edges around the eyes with a large pupil in the middle. On the other hand, the image of a closed eye will have only one dark edge with no pupil. There is a pattern associated with each of these two categories of images.

Read more about this project (PDF).