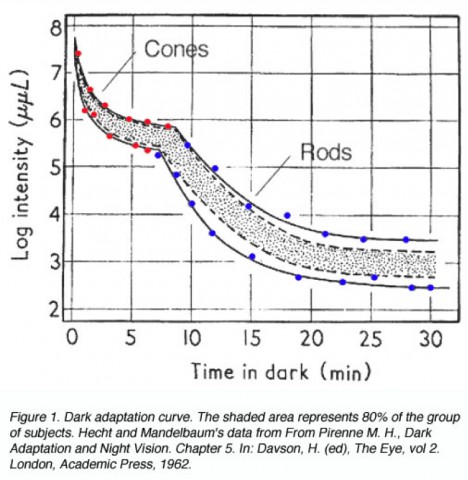 The team analyzed FrACT (Freiburg Visual Test) visual acuity and contrast data over time as subjects  adjusted to the dark in order to better understand healthy scotopic (night) vision. They found that speed of darkness adaptation appears to be highly variable, and that these data do not suggest speed of darkness adaptation relates to an individuals’ final ability to see in the dark. The team did find a small number of genetic markers associated with improved night vision, which will be pursued further in future work by the study team.

“I don’t know if it’s because I was on maternity leave for the first half or if they were just really good, but I felt like being involved took no effort on my part at all, and I got cool results without having to put much time in. It was a lot more fruitful than I had expected. Also it was fun to see the students learn scientific skills: they both told me they got an awful lot out of the program.” Liz Cirulli, Assistant Research Professor in Molecular Genetics and Microbiology

See what some of our Data+ students were up to this summer.