We introduced students to spatial analysis in QGIS and R using location data from two whale species tagged with satellite transmitters. Students were given satellite tracks from five Cuvier’s beaked whales (Ziphius cavirostris) and five short-finned pilot whales (Globicephala macrorhynchus) tagged off the North Carolina coast. Students then used RStudio to calculate two metrics of these species’ spatial ranges: home range (where a species spends 95% of its time) and core range (where a species spends 50% of its time). Next, students used QGIS to visualize the data, producing maps that displayed the whales’ tracks and their ranges.

The dataset consists of series of location points recorded from satellite tags on five short-finned pilot whales and five Cuvier’s beaked whales. The whales were tagged off Cape Hatteras, NC between 2014 and 2016 as part of a joint effort between Duke University and the US Navy Marine Species Monitoring Program (Deep Divers and Satellite Tagging Records).

We gave a brief overview of the ARGOS satellite system and issues involved in cleaning up the error-prone data that is recorded by ARGOS satellite tags. We introduced the concept of geographic information system (GIS) software used for geospatial analysis. We discussed the need to project three-dimensional spatial data from the Earth’s surface onto two-dimensional planes for analysis in GIS software and explained the importance of consistently using the same projection within a single project.

We then presented the whale track data and explained the concept of home ranges and core ranges. Next, we gave students the instructions sheet, which walked them through calculating home range and core range for both species of whale. The assignment asked students to: use the open-source QGIS program to load satellite-recorded whale locations; project the 3D latitude-longitude coordinates onto a 2D plane; export the projected coordinates into a file that could be loaded with the R programming language; use R to calculate the home range and core range of each species using a method known as kernel density estimation (KDE); transfer the resulting polygons back into QGIS; and create clear, easy-to-read maps in QGIS displaying the whales’ tracks and their ranges.

We expect a paragraph but no more than one page. Please cite the sources you use. 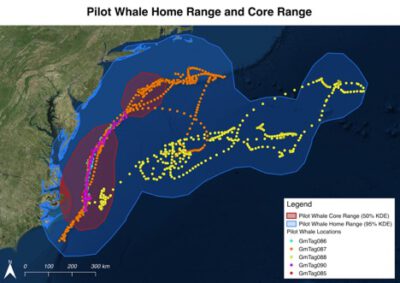 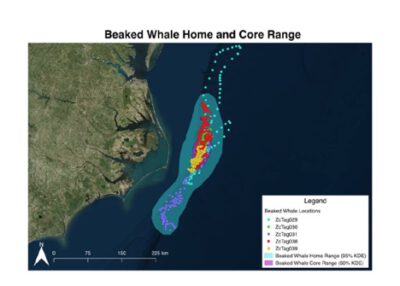