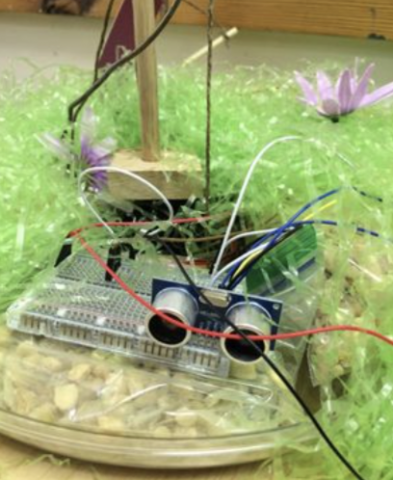 Students in the Performance and Technology Class create a series of performances that explore the interface between society and our machines. With the theme of the cloud to guide them, they have created increasingly complex art using digital media, microcontrollers, and motion tracking. Their work will be on display at the Duke Choreolab 2016. 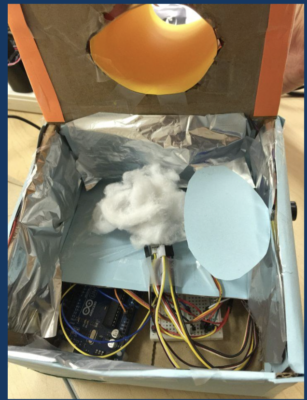 We typically look at clouds from a fixed perspective: from the ground, looking up. Our project aims to give new insight into how we perceive clouds, invoking a sense of whimsical surprise that brings a level of interaction between the perceiver and the system. We use a proximity sensor, light sensor, servo motor, and a variety of LEDs in order to allow people to control the system and discover what it means to see clouds in a whole new light. 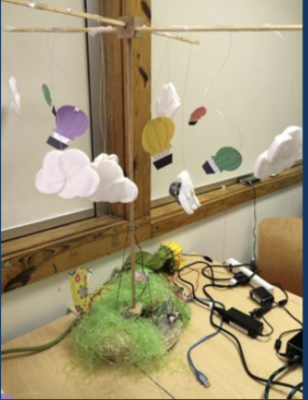 The concept behind our project was to take the idea of a cloud and create a whimsical environment similar to a baby mobile. We engineered a rotating device that responds to an approaching individual; when a person is within 60 centimeters of the range finder, a servomotor (located at the base) is activated to spin a wooden rod 180 degrees back and forth. Simultaneously, another servomotor is triggered to open a birthday card that produces a playful song to add to the dreamy ambience. At the top of the mobile, there are two rods that intersect within a wooden cube with several cotton clouds and paper hot air balloons hanging off of it. We wanted the swinging of the clouds to recreate the experience of cloud watching: with the clouds drifting over a field. 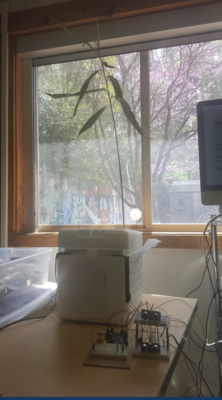 The interaction of nature and technology has always been a contentious one. With this project we sought to create a combination of the two worlds where the forces of nature—in particular, clouds—are controlled by technological innovation. We have a box of dry ice with a lid that is controlled by motor. As the observer comes closer to the display, the sensor “sees” this approach and begins to raise the lid, releasing the billows and clouds of the dry ice. The closer the person comes, the more the lid opens.

As they leave, the lid lowers. This system also incorporates LED lights to mimic stars in the sky as the observer approaches, creating a more realistic effect.
In keeping our tense balance of nature and technology, we have our fishing line pulley running over a tree branch, as though the scene takes place in a different space—in the canopy of a forest, in the midst of a storm, or in a park on a foggy day. 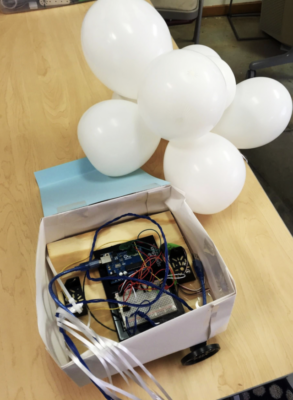 Our project aims to explore the playfulness of chasing clouds in our childhoods. We used an Arduino coupled with an ultrasound rangefinder and continuous servos to create a cloud that runs away from you as you walk closer to it and sneaks up closer behind you as you walk away from it. To create our cloud, we used white helium balloons that were bundled together.