Robert Calderbank is Director of the Rhodes Information Initiative at Duke University, where he is Professor of Electrical Engineering, Computer Science and Mathematics. He joined Duke in 2010, completed a 3 year term as Dean of Natural Sciences in August 2013, and also served as Interim Director of the Duke Initiative in Innovation and Entrepreneurship in 2012. Before joining Duke he was Professor of Electrical Engineering and Mathematics at Princeton University, where he also directed the Program in Applied and Computational Mathematics.

Before joining Princeton University, Dr. Calderbank was Vice President for Research at AT&T. As Vice President for Research he managed AT&T intellectual property, and he was responsible for licensing revenue. AT&T Labs was the first of a new type of research lab where masses of data generated by network services became a giant sandbox in which fundamental discoveries in information science became a source of commercial advantage.

At Duke, Dr. Calderbank works with researchers from the Duke Center for Autism and Brain Development, developing information technology that is able to capture a full spectrum of behavior in very young children. By supporting more consistent and cost-effective early diagnosis, the team is increasing the opportunity for early interventions that have proven very effective.

At the start of his career at Bell Labs, Dr. Calderbank developed voiceband modem technology that was widely licensed and incorporated in over a billion devices. Voiceband means the signals are audible so these modems burped and squeaked as they connected to the internet. One of these products was the AT&T COMSPHERE® modem which was the fastest modem in the world in 1994 – at 33.6kb/s!

Dr. Calderbank has also developed technology that improves the speed and reliability of wireless communication by correlating signals across several transmit antennas. Invented in 1996, this space-time coding technology has been incorporated in a broad range of 3G, 4G and 5G wireless standards. He served on the Technical Advisory Board of Flarion Technologies a wireless infrastructure company founded by Rajiv Laroia and acquired by Qualcomm for $1B in 2008.

Dr. Calderbank is an IEEE Fellow and an AT&T Fellow, and he was elected to the National Academy of Engineering in 2005. He received the 2013 IEEE Hamming Medal for contributions to coding theory and communications and the 2015 Shannon Award.

Robert Calderbank has been reappointed as director of the information initiative at Duke (iiD) for a three-year term beginning July 1, 2019.

Robert Calderbank, director of the Rhodes Information Initiative at Duke, and Vahid Tarokh will lead a national initiative to develop AI-informed communication and networking protocols fast and reliable enough to...

Rhodes iiD Director Robert Calderbank discusses his recently published work on something he calls pulsones, which may contribute to a more efficient future air interface.

The Rhodes Information Initiative at Duke (Rhodes iiD), in partnership with the Nicholas Institute for Energy, Environment & Sustainability is now accepting student applications for this summer’s Climate+ projects. Read... 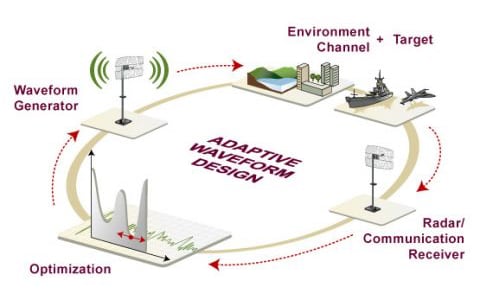 Agile Waveform Design in the Presence of Opposition: Quantifying Performance 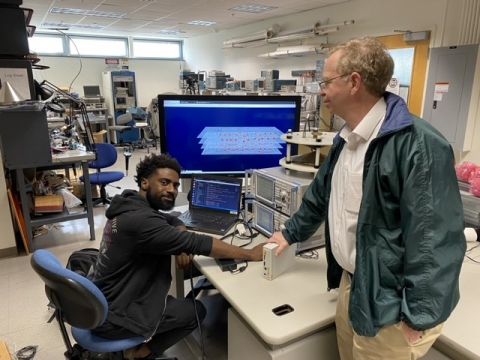