This is an overview of intellectual and technical adventures rooted in the project of organizing an exhibition at the North Carolina Museum of Art (NCMA) that reunites, for the first time in more than 100 years, the panels of the 14th-century Italian St. John altarpiece by Francescuccio Ghissi.

A more extensive write-up can be downloaded here. (7.4 MB PDF)

How it all started

The Ghissi altarpiece had been removed from its church over a century ago, and dismantled. The 9 individual scenes (one central scene crucifixion, and 8 smaller pictures featuring St. John the Evangelist) had been sawn apart; the resulting panels ended up in different collections. Three of the four panels from the Kress Foundation are now at NCMA; the fourth is in the Portland Art Museum. Three other small panels are with the Metropolitan Museum in New York; the larger central panel is in the Art Institute in Chicago. But 3 + 1 + 3 + 1 adds up to only 8, not 9 — the ninth panel (the last of the 8 smaller scenes) is lost. A Reunited Altarpiece could never be truly complete …

To complete the altarpiece, NCMA commissioned the Dutch artist and art reconstruction expert Charlotte Caspers to “reconstruct” the lost panel. Together with NCMA curator David Steel she designed a composition in Ghissi’s style; the scene likely represented in the ninth panel could be determined from the Golden Legend, a medieval bestseller chronicling lives of saints, which was the source for the first 7 small panels.

The new panel did not disappoint — it gave a vivid demonstration of how bright and sparkling these altarpieces were in their own time.

But it became clear that the new Caspers panel could not simply be displayed next to the 8 other panels in the same frame — vivid and bright, it would hog the viewer’s attention away from the faded originals, even though it was an imposter next to the real panels.

Image analysis to the rescue

The Duke IPAI (Image Processing for Art Investigation) group could help with this, however! By studying the old as well as the new panels, we could virtually age the new panel — i.e. make a digital copy in which the gold would look duller, the colors would be altered to mimic 650 years of aging of the pigments, small cracks would be added. A printout could then “complete” the Reunited Ghissi Altarpiece, without distracting from its authentic siblings. 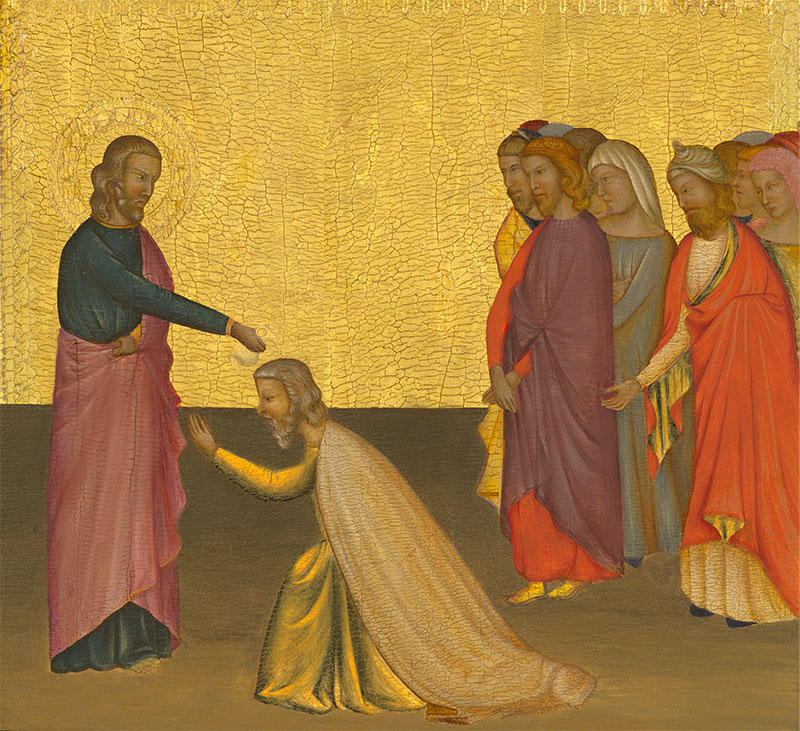 The technical analysis needed to achieve the virtual aging can also be applied in the reverse direction. From the correspondence between `old’ and `new’ for each pigment mixture used in the altarpiece, and after fine-tuning the digital image manipulations to make the transition from new to old, we can just also take a high resolution image of the old panels, and map their old, aged colors to corresponding freshly painted versions, thus rejuvenating the 14th century panels.

To make the rejuvenation more realistic, we first removed the craquelure: we located the cracks automatically, and then inpainted them digitally.

Finally, we also simulated the gold backgrounds. The original panels has burnished goldleaf backgrounds, with punchmarks stamped in them, which Charlotte Caspers reproduced on the reconstructed 9th panel.

In these stamped patterns, light gets reflected differently on the gold leaf edges, providing local sparkling accents. Over the centuries, the patterns get clogged with dirt and they start looking darker than the surrounding gold, so that the effect gets reversed through aging.

For the rejuvenated panels, we replaced the gold-leaf backgrounds, aged to dull yellow fields full of cracks, with reflecting gold surfaces and sparkling punchmarks. To this end, we first determined the punchmark locations, and then used computer graphics tools (used mostly by computer game developers!) to model the gilded backgrounds. 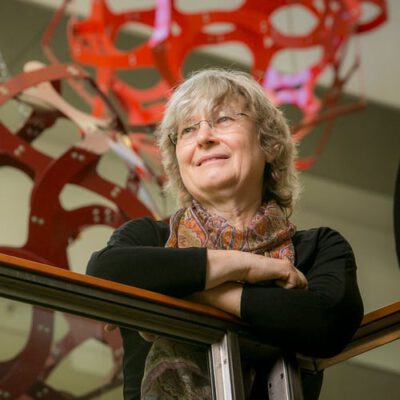 James B. Duke Professor of Mathematics and Electrical and Computer Engineering