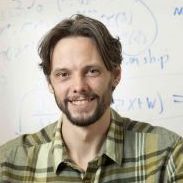 Galen Reeves joined the faculty at Duke University in Fall 2013, and is currently an Assistant Professor with a joint appointment in the Department of Electrical and Computer Engineering and the Department of Statistical Science.

He completed his PhD in Electrical Engineering and Computer Sciences at the University of California, Berkeley in 2011. From 2011 to 2013 he was a postdoctoral associate in the Departments of Statistics at Stanford University, where he was supported by an NSF VIGRE fellowship. In the summer of 2011, he was a postdoctoral researcher in the School of Computer and Communication Sciences at EPFL, Switzerland; in the spring of 2009, he was a visiting scholar at the Technical University of Delft, The Netherlands; and in the summer of 2008, he was a research intern in the Networked Embedded Computing Group at Microsoft Research, Redmond. He received his MS in Electrical Engineering from UC Berkeley in 2007, and BS in Electrical and Computer Engineering from Cornell University in 2005.